Gallery The Principle of Hope 2018 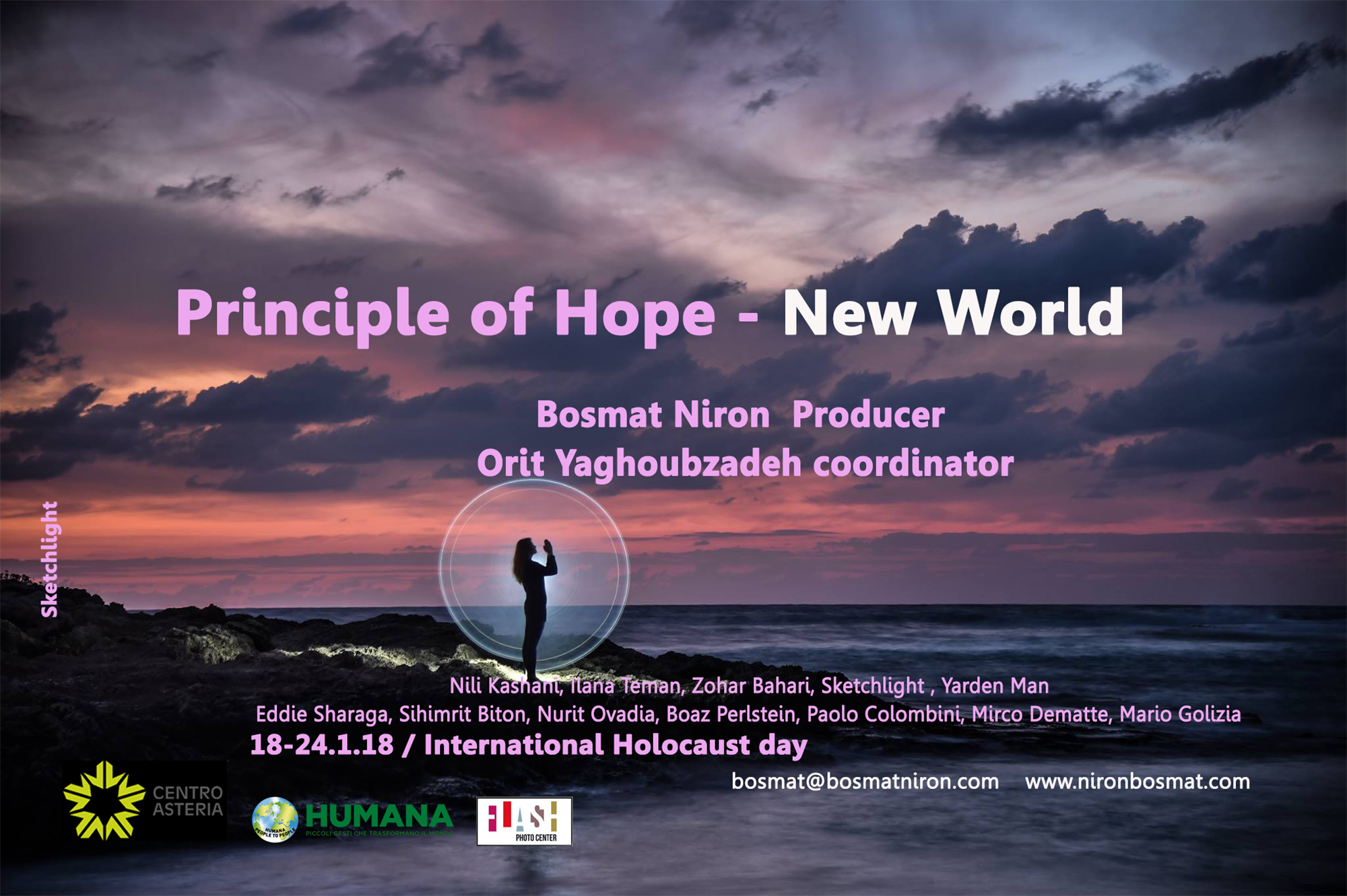 The principle of hope (1) and responsibility for others are key terms in the ideology of a relationship based on ethical and moral human ideals that aspire to salvation and hope. "Infinity finds its expression in the space of interpersonal relationships".(2) "When the Lord created the first man, he made him know all the trees of paradise, and told him: see how beautiful and commendable my actions are, and all that I have created - I have created it for you. Be careful not to ruin and destroy my world. Because if you ruin it, there will be no one to fix it.(3) This Talmudic verse presents the exclusive and personal responsibility of every human being for the fate of creation. "The correction of the world and its praise are the task and the destination of the human being". (4) The education or moral formation of the human being must not begin by correcting his leaders, but by changing his way of thinking and establishing his character ".(5)

The exhibition - The Principle of Hope - New World wishes to broaden the limits of the colloquium regarding the Holocaust and to escape from the present-day contemporary by means of a concept of "seeds of the future", transforming the tragedy of the Holocaust into the establishment of love for the human being, the sanctification of life, based on moral values. Anne Frank wrote in her diary "and despite everything, I still believe that human beings are fundamentally good". A humanitarian person acts with common sense, and understands the meaning of social responsibility. "Being humanitarian means ... to open ourselves wholeheartedly and to everything".(6) Hope is the human driving force that leads to a better future. Because "beauty is the symbol of moral good"(7) Of all species and creatures, the human being is the worst, is the one who has wickedness, and the fact that he is capable of doing evil shows his moral inferiority in confrontation with animals that do not do anything wrong. "And he created this world in opposition to the celestial world, and all that is in the celestial world, has a specimen in the earthly world and everything in the earthly world, has a specimen in the sea, and everything is one".(8) And so we must hope that the laws of morality act and consequently "act in such a way that your actions are adequate to the realm of possible ends" (9) The purpose of our existence is faith and hope, if you wish it will not be a dream. (Herzl) .... "The earth will be a place of healing, and it is already enveloped in      new perfumes that bring salvation and new hope."(10) Consequently, the obligation to act to achieve the goal of eternal peace falls on us.

It is a new spiritual world" (11) that deals with questions of form with aesthetic and moral values ​​that presents questions about space and time, which bases its creation on the fundamental rule of all religions" love your neighbor as yourself " (12) (Judaism, Catholicism, Islam) and as the important epic of Hinduism says as a rule "do not do to others as you would not have done to you. This is the right path in life (13) until a people no longer raises the sword against a people and will no longer learn war ". (14)

The memory of the Holocaust is conceived as a historical event that changes life. From here, it is natural to attribute to the thought of "correction of the world" meanings of personal, community and social processes. The dream is to imprint a memory, a theme on the basis of which the Holocaust is not a collection of data and exposure to the vulgarity of evil and suffering, but implies a link with a life of value and meaning that continues to exist in the reality of destruction. The exhibition wishes to create hidden lights of hope and promotes the principle of correction according to its social meaning. This is in fact art with a spiritual thought. "And I gave them a heart and I will give them a new spirit and I will take the heart of stone from their body and give them a heart of flesh".(15)

In the fifth Zionist Congress in Basel Buber argued that "the task of Jewish art is to provide an education of value, aesthetics, to be a tool for self-knowledge, to act as a cultural vanguard for the people and the world. To flourish and make our desire for beauty and nature bloom ... we must use the legacy of the past as material. Art is important for Zionism as an instrument of education in sensitivity and beauty ... there is nothing like art to express the truth - and Jewish art will best express our nature as Zionists, as Jews, as human beings. It will be a testimony of our awakening. Looking at it, says Buber, we will know ourselves ".(16)

The space dedicated to the exhibition will be divided into seven rooms associated with the seven days of creation, as a metaphor for the new creation. The exhibition that unites the stratified reality (simulation holograms) guides the contemporary, the confusion of the times, between the immediate and current time, and the reflective time. It is a situation of evasion and hyper-reality, in which the individual is lost between the different dimensions of reality and situations of extreme feeling. The photos, allusions are a dimension of the testimony that has been torn from what "was a certain moment in this life involved in that event".(17)

The determined content, hyper realistic and deep, shakes and confuses the awareness, influences the senses and the understanding. The repeated use of atrocities photos intensifies the sensation of trauma. Experience, personal sensory evidence bring out every feeling, lead to a feeling of despair, emptiness of the reality of human space, collective general collapse. The experience of art is influenced by many factors, starting from the level of participation, from the environment, from space to other people who are there. The concept of experimentation is indivisible from the unity of presence, from contemporaneity. Whoever looks at the show will undergo changes, emotional shocks. These will help to build a system with a new scale of values. Through the rational use of archetypes and collective knowledge the rational produces values and feelings, these will lead to the formation of a personal and collective memory.